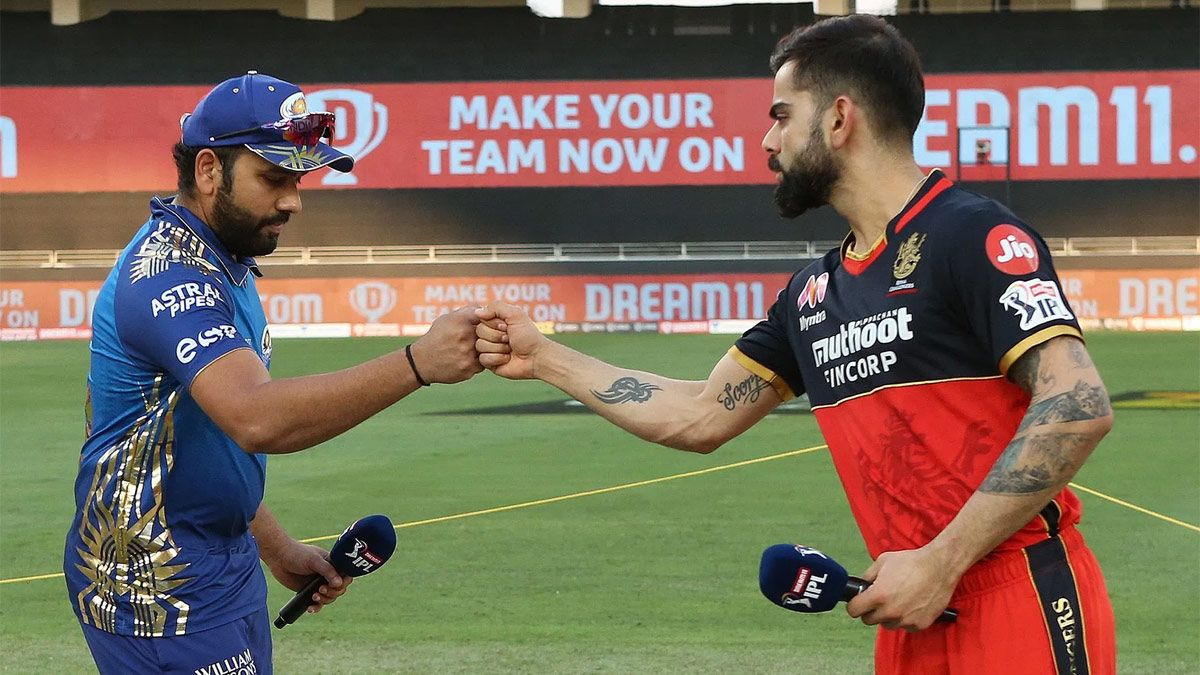 Chennai: Rohit Sharma has a legacy to defend, Virat Kohli would be looking to create one while a “been-there-done-that” Mahendra Singh Dhoni seems ready to pull off a fresh trick when the Indian Premier League starts here on Friday, cooped up in a bio-bubble as a raging pandemic wreaks fresh havoc.

Two editions of IPL within a space of five months isn’t an ideal situation for all the stakeholders.

But for the fans at large, exhausted by the second wave of COVID-19 with cases going past the one lakh mark daily, watching towering sixes, toe-crushers and new talents unearthed will be a welcome diversion in the next seven weeks.

The opening encounter will be between defending champions Mumbai Indians and under-achievers Royal Challengers Bangalore here and the big-hitters on both sides will ensure that necessary fireworks will be there even if fans are absent from the stands thanks to the pandemic.

The virus has cast its shadow on the league in the build-up stage with some positive cases among both players and support staff. But with a strict bio-bubble in place for the games, the BCCI would be hoping for a smooth run just like the previous edition in the UAE.

If one looks at the bigger picture, the 14th edition of IPL assumes greater significance as it is being held in a T20 World Cup year and that too in the sub-continent.

If Kohli will keep a ‘Hawk Eye’ on the performances of his probable list of players, it won’t be any different for an Eoin Morgan or a Kieron Pollard, who would also be preparing for the mega-event while giving it their all for their respective franchises.

For Rohit, the most successful captain in the ‘IPL Universe’ with an unprecedented five titles, he could well walk away with a sixth trophy and the first title hat-trick of this league.

Mumbai Indians, perhaps in the near two decade existence of Twenty20 format, is a side that will be remembered for its aura.

If Rohit fails, then Quinton de Kock will certainly succeed. If both fail, Ishan Kishan and Surya Kumar Yadav could scare the daylights out of the opposition.

And if the top-order is blown away, then the indomitable Pandya brothers (Hardik and Krunal) will be on the rivals’ case.

On the outfield, Kieron Pollard will save those extra runs apart from the trademark big hits always expected of him and also bring in the change of pace suited for the Chennai track.

Trent Boult, with his swing, and Rahul Chahar, with his googlies, will also test the batsmen.

Mumbai Indians can only lose on their bad days and on good days, they are going to be a nightmare as England captain Michael Vaughan has already warned.

Rohit’s opposite number is the national captain, who is ready to open once again but the squad composition of RCB doesn’t inspire the highest confidence.

Glenn Maxwell has again been picked for a bomb and New Zealand’s Kyle Jamieson has been made an overnight multi-millionaire by the franchise despite him being untested on Indian dust-bowls.

Devdutt Padikkal will be in his second season with teams analysing him way more and Yuzvendra Chahal seems to have lost his mojo.

Mohammed Siraj and Navdeep Saini do not inspire the highest confidence in in white ball cricket at least despite their gutsy performances in Australia early this year.

Amid all this, Dhoni will be quietly smiling and may be planning differently as it will be a placid Wankhede where CSK will be playing Delhi Capitals instead of sluggish Chepauk on Saturday.

The return of seasoned Suresh Raina, which opens up an option to play Imran Tahir in most games, and the presence of Moeen Ali and Sam Curran as floating all-rounders gives CSK a better look than last time.

As Dhoni brings on his years of IPL leadership experience, his ardent “fan” and “disciple” Rishabh Pant is ready to chart his own destiny as a Delhi Capitals leader while taking inspiration from his illustrious senior’s captaincy.

Pant 2.0 after his Gabba heroics is the most confident man in Indian cricket currently and with a batting line-up that has Prithvi Shaw, Marcus Stoinis, Shimron Hetmyer along with the experience of Steve Smith and Ajinya Rahane, Capitals would like to finish one better than last time.

Kagiso Rababda and Anrich Nortje’s cobtribution will be as important as Ravichandran Ashwin, Amit Mishra and Axar Patel’s bowling.

Sunrisers Hyderabad is one of the most low profile teams which has been known for on-field exploits. A superb assortment of foreign players comprising the prolific David Warner in batting and world’s best T20 bowler Rashid Khan along with Kane Williamson, Jason Holder, Jonny Bairstow and Jason Roy makes them a contender.

Kolkata Knight Riders would expect that Andre Russell gets his six-hitting prowess back while Varun Chakravarthy is more than a one-season wonder.

Eoin Morgan, the best white ball international skipper on view, would look for a settled batting order while praying that Sunil Narine isn’t again called for a suspect action.

For Punjab Kings, the owners would hope that change in the name brings about a change in luck but a lot would depend on skipper KL Rahul’s performance.

He wouldn’t mind another ‘Orange Cap’ while Mohammed Shami would like to make a roaring comeback in international cricket. Chris Gayle, in between, is sure to provide entertainment but the team is certainly not title contender to start with.

For Rajasthan Royals, the absence of Jofra Archer first up will certainly rob them off initial momentum and with another wobbly Indian line-up under an inconsistent Sanju Samson at the helm, the heavy-lifting is going to be done by Ben Stokes, Jos Buttler and Chris Morris.

Still, a play-off berth looks highly unlikely as of now.